Article
“I will not bring 18-year-old Afghans to the Czech Republic because I consider it a security risk,” said Czech Interior Minister Jan Hamáček of the Social Democrats at the beginning of the year, when the country was asked to take in 40 unaccompanied migrants and refugees from Greece’s overflowing refugee camps. He had reiterated different variations on that position before then and has repeated them since, most recently after the blaze that razed the Moria camp on the island of Lesbos to the ground, leaving thousands of unaccompanied minors and hundreds of parents accompanying their children homeless.
By Adéla Jurečková 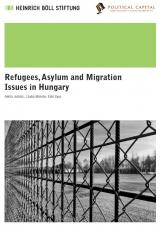 How far does Budapest's influence extend? How has the "refugee crisis" affected regional cooperation? This study gives background information, facts and data on the last three years of the “refugee crisis”: its social, political, policy and diplomatic repercussions. An analysis of the Orbán government’s rhetoric and policy measures with regard to refugee, asylum and migration issues, highlighting the regional context.

A special EU summit of heads of state and government will take place on 23 September. After years of neglect, however, a solidary EU refugee policy cannot be elaborated in summary proceedings and under pressure. A commentary by Eva van de Rakt.
By Eva van de Rakt