Article
“I will not bring 18-year-old Afghans to the Czech Republic because I consider it a security risk,” said Czech Interior Minister Jan Hamáček of the Social Democrats at the beginning of the year, when the country was asked to take in 40 unaccompanied migrants and refugees from Greece’s overflowing refugee camps. He had reiterated different variations on that position before then and has repeated them since, most recently after the blaze that razed the Moria camp on the island of Lesbos to the ground, leaving thousands of unaccompanied minors and hundreds of parents accompanying their children homeless.
By Adéla Jurečková

The nuclear legacy nobody wants

Czech nuclear reactors have so far produced at least 4000 tons of highly radioactive waste. If the number of reactors grows, so will the amount of waste produced. The government has long declared itself in favor of developing nuclear energy even as it still does not know how to solve the nuclear waste problem. Martin Sedlák takes a look.
By Martin Sedlák

A special EU summit of heads of state and government will take place on 23 September. After years of neglect, however, a solidary EU refugee policy cannot be elaborated in summary proceedings and under pressure. A commentary by Eva van de Rakt.
By Eva van de Rakt

Czech Republic and Slovakia 25 Years after the Velvet Revolution: Democracies without Democrats

The Velvet Revolution in November 1989 found Czechoslovakia, just like the other states emerging from the era of communist dictatorships, with a centralised economy, no political pluralism and a civil society limited to a few dissident initiatives. The new political elite were faced with the tremendous task of creating the institutions of liberal democracy; a market economy, the rule of law and a civil society.
By Jiří Pehe

The Arms Trade: When Interests and Obligations Meet

In recent years the Czech arms industry has experienced a small renaissance. During the last five years, trade in military material has risen from a volume of EUR 62.8 million in 2009 to EUR 138.2 million in 2013. This more than 100 % growth has affected exports that can be perceived as risky. Are Czech products, in this context, becoming tools for power in the hands of undemocratic regimes?
By Michal Mochťak 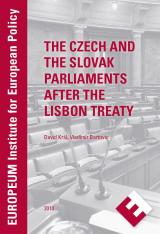 The Czech and the Slovak Parliaments after the Lisbon Treaty

This publication is an output of a project called "New role of the national parliaments in the EU decision-making processes: previous experience and new challenges pursuant to the Lisbon Treaty", undertaken by EUROPEUM Institute for European Policy together with the Institute of Public Affairs in Warsaw and Stiftung Wissenschaft und Politik in Berlin with the financial support of Heinrich Böll Foundation.

The 2013 Elections: The Deconsolidation of the Party System and the Rise of Anti-Politics

This year’s early elections to the Chamber of Deputies brought neither calm nor a left-wing majority to the Czech political scene. To the contrary, we experienced the greatest shock to the party system since the 1998 elections, the rise of new political parties and anti-political, populist entities, i.e. a deepening of trends which appeared already in the 2010 elections.

On 21 August 2013, news coverage in the Czech Republic focused mainly on two stories: One was analysis and commentary on the 20 August decision to dissolve the Chamber of Deputies; the other recalled the day exactly 45 years earlier when Warsaw Pact troops invaded the former Czechoslovak Socialist Republic.

Anti-Roma Sentiment on the Rise in the Czech Republic

The Czech Republic is showing signs of a new wave of agitation against Roma. For months now, hardly a week has gone by in which neo-Nazi groups have not marched somewhere in the country and – actively supported by “normal citizens” – chanted slogans like “black pigs”, “against multiculti” and “Gypsies to work”. Such demonstrations with this frequency, geographical extent and above all with the participation of the population are unprecedented in the Czech Republic.