Behind a Climate Smokescreen: Czech Support for Nuclear Energy

At first glance, it might seem that the Czech climate movement can put the flags out. A government bill on measures for the Czech Republic’s transition to a low-carbon energy industry has been submitted to the Chamber of Deputies and is being debated rapidly in extraordinary sessions. The title of the bill may evoke the anti-fossil law which was urged by Czech environmental organizations in the “Great Challenge” (“Velká výzva”) campaign for years. Nevertheless, as we learn in one of the bill’s introductory articles, the Definition of Terms, a low-carbon electricity generating plant for the purpose of this law means one with a nuclear reactor. The rapid reduction of risks related to global climate change is obviously not the real goal of this bill.

In submitting this bill, the Ministry of Industry and Trade is responding to the fact that energy companies do not include nuclear reactors in their business plans. Besides being extremely investment-intensive, new nuclear projects also have a significant risk of cost increase during their construction and they are uncompetitive in the current energy market. The State Energy Policy of the Czech Republic is not an authoritative document for CFOs. Foreign examples also show that nuclear projects only emerge under the condition of guaranteed purchase prices or other economic incentives provided by the government.

It is worth noticing that the support for nuclear energy in the government bill is somewhat cunning. The first type of support the bill puts forward is the option of a favourable state loan for investors in nuclear projects. However, given the chronic budget deficit, the government is not going to provide the loan from its own resources. It is thus startling that the bill does not contain any limitations related to the government debt ratio or the Czech Republic’s credit rating. A hundred billion for a nuclear power plant might thus threaten the state’s possibility of getting cheap loans for other purposes. One can only hope that future governments will approach state loans for nuclear reactors cautiously, as the law is not going to limit them.

What seems even more questionable is the support in the form of guaranteed purchase price. According to the bill, it is supposed to bring a return on investment and reasonable profit to the investor. Again, the bill does not stipulate any maximum limit for the guaranteed purchase price. As a result, it will inevitably be paid for by power consumers, and the UK’s experience with the new Hinkley Point nuclear power station shows it is not going to be cheap – once the power station is put into operation, the operator will get approximately 70 percent more in comparison with the upper wholesale price level over the previous period.

Considering experience with nuclear power stations in recent years, it seems alarming that the rules for support do not even mention the possibility that the project might face a cost increase and how this might be dealt with – despite the fact that recent European projects (Finland, France, Slovakia) are currently seeing approximately threefold increases in their original budgets. In such cases, it is not clear whether contractual parameters will be amended or whether the loans may be increased. There is no option for a fixed contract with the investor ensuring that a potential increase in costs will be addressed between the investor and suppliers. Such an option would grant the state a certain amount of protection – the support provided by the government would not exceed the amount stated in the contract concluded by the state and the investor. Furthermore, the bill does not even oblige the investor to submit a functioning reference project as a condition for the state support.

Having read this, one might say that this procedure is not standard, but that it is possibly inevitable if we want to support substitutes for fossil sources in order to reduce greenhouse gas emissions. The fact is that existing attempts to make fossil fuels less favourable (mainly the obligation to buy emission allowances) only take effect slowly and have not yet transformed the energy market. Nuclear and renewable resources have not managed to beat old coal-fired power stations yet.

The main problem is the fact that the above-mentioned bill, as well as the whole governmental strategy, is not going to address the necessary rapid transformation of the fossil energy industry into a decarbonized one. This law and the proposed state support may contribute to the opening of one big nuclear block in approximately 2040 – unless there is a delay of many years as in Finland or France. And this is not going to be sufficient to replace coal-fired power stations.

It is this very focus on supporting nuclear energy, however, that is sidetracking the huge potential of renewable energy resources, especially the boosting of wind energy. The wind energy sector has been growing rapidly in many countries, but in the Czech Republic it has more or less stagnated since the end of 2013 – with all due respect to those who managed to build several new wind projects in spite of difficult conditions. The government has tabled an amendment to the law on energy resource support which is supposed to aid the rollout of wind power stations, but the bill is stuck in a queue and is unlikely to be debated before the next parliamentary election.

Is There a Choice?

Are there any other options for the Czech Republic? It may certainly choose the German (or Austrian, Danish, Swedish, Portuguese etc.) path based on the development of renewables. The new nuclear block would start to generate about 8.9 TWh of power per year starting from approximately 2040.

Developing the renewable energy sector could secure generation of 5.3 TWh from new wind projects and 4.9 TWh from new photovoltaic projects by 2030. By 2040, renewables will be able to increase power generation by 11.9 TWh from wind, and by 11.6 TWh from solar energy compared to the current situation. These estimates come from the Czech Republic’s Chamber of Renewable Energy Sources.

There seem to be three recurrent objections when it comes to renewables. Firstly, it is sometimes suggested that the renewable scenario is too expensive. The purchase price for power from large-scale renewable projects (wind farms, big photovoltaic power stations) has been auctioned in Europe in recent years – the guarantee is given to the lowest-bidding investor. Auction results differ depending on specific projects and location. A recent auction for onshore wind power stations in Poland had a purchase price of 45 Euros per MWh, while in Greece it reached 57 Euros. In Germany, a February 2020 auction reached 61.8 Euros for onshore wind parks, and 50 Euros for large-scale photovoltaic projects respectively. I dare say that the investor in the new Dukovany nuclear power station project is going to ask for a significantly higher guaranteed price, at least 80 Euros per MWh – which would still be relatively cheap compared to those in the United Kingdom.

And finally, some critics say that solar and wind energy will not be sufficient. Nevertheless, it is unwise to underestimate and waste renewables’ potential, since the reduction of emissions is not feasible without them. Examples from abroad have shown that a much larger share of renewables can be integrated in the grid – even in the Czech Republic. Before we manage to restore our energy industry, renewable superpowers will have achieved major progress in accumulation and power-to-gas technologies (production of gaseous fuel using surplus power from renewables).

Let us take a look into the future: Europe will not give up its efforts to dramatically reduce greenhouse gas emissions by 2030, and the price of emission allowances will rise markedly. Coal-fired power stations will shut down, one by one. Countries with a developed renewable sector will sail through easily. The Czech Republic will be amazed to think that in 2020 someone actually wanted to pass a law supporting a new nuclear power station.

This article was originally published in Czech in “Sedmá generace” magazine no. 6/2020 with the support of Heinrich-Böll-Stiftung Prague. Translated by Petra Jelíková. 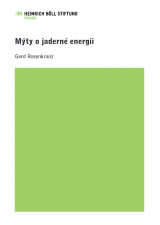