Interview
The murder of George Floyd has thrown the USA into a state of unrest. Trump is throwing fuel on the fire in an attempt to increase his re-election chances. 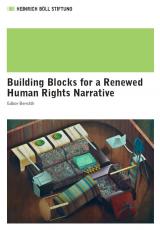 This study aims to lay the foundations of a collaboration that can be joined by other organisations still being formed, as well as by actors sharing human rights values who can reach out to additional potential supporters. This text is designed to be continuously expanded in the future, so as to further incorporate increasingly sensitive analyses along with a growing pool of creative ideas and recommendations.

The Battle for Modernity

Today’s central line of conflict runs between open societies and various forms of Identitarian radicalism. The challenge we face is to reconcile rapid changes in a globalized modern age with our need to belong and our need for security.
By Ralf Fücks

Is the Czech Republic Still Abstaining on Human Rights?

When the Universal Declaration of Human Rights was adopted by the UN in 1948, eight of its 48 member countries abstained from the final vote: South Africa, Saudi Arabia, Yugoslavia, USSR, Belarus, Poland, Ukraine and Czechoslovakia. While watching developments in human rights protections in the Czech Republic over the past 15 years, I have often reflected on the repercussions of that abstention. The Charter 77 movement, which resulted in Civic Forum and the democratic transition of 1989, has been lauded internationally, especially in the English-speaking world, for having based its challenge to totalitarianism on demanding respect for human rights.